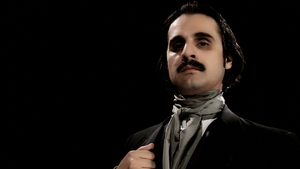 Edgar Allan Poe rises for this special virtual event just in time for his birthday! The author was born in Boston in 1809, the same year that Christopher Gore was serving as governor of Massachusetts. Poe himself (portrayed by literary historian Rob Velella) returns from beyond the grave to read several of his works, both well-known and forgotten. Recommended for ages 13 and up.

Rob Velella is an independent literary historian and playwright specializing in American literature of the 19th century. As a scholar, Velella has published articles and presented academic papers on figures as varied as Margaret Fuller, Oliver Wendell Holmes, and Walt Whitman. Nicknamed the “Prometheus of American literary scholarship,” he has taken his research outside of academia by lecturing at various historical sites, libraries, and colleges.