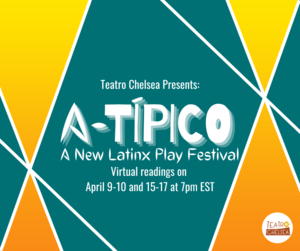 A-Típico: A New Latinx Play Festival features 6 plays by Latinx playwrights—four full-length and two one-acts—that will leave audiences with jaws dropped, hearts full, and feeling artistically refreshed. The lineup features plays that are in Spanish, in English and Bilingual.

The festival will be presented in the style of a workshop. The company and audience will have the opportunity to give the playwrights feedback to help them in the development of their work.

The stories all vary greatly in subject, theme, setting, and their exploration of human nature:

"Before We Focus on Others" by Diego Lanao (April 9, 7PM, Bilingual)
-A relationship counselor’s marriage is on the brink

"SAA (not that one)" by Luis Roberto Herrera (April 15, following “Anormales” at 7PM, One Act, English)
-A support group for alien abduction survivors

"Binary Star" by Guadalupe Flores (April 16, 7PM, English)
-The relationship between an autistic astrophysicist and her estranged niece

"Flood" by Alicia Margarita Olivo (April 17, 7PM, Bilingual)
-A transgender teen comes out to their immigrant family as Hurricane Harvey rages outside

Teatro Chelsea celebrates Latin cultures, showcases and fosters local talent, builds community in Chelsea through arts engagement and collaboration, and is establishing a hub for Latin artists in the Boston metropolitan area. Teatro Chelsea creates theatre at the crossroads of languages, cultures, and histories that make up the Latin experience, and seeks to amplify and honor the voices that speak to these unique experiences.