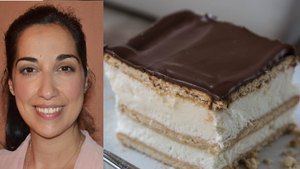 Celebrate Opening Night of the 3rd Annual Boston Israeli Film Festival with Chef Liora Kushner, as she teaches you how to make this simple and delicious no-bake biscuit cake, an iconic Israeli dessert!

Liora Kushner is the owner of Liora’s Catering, a Boston-area boutique catering company, specializing in events based on Mediterranean-style cuisine. Liora moved to Boston from Israel in 2002, where she was a practicing civil attorney. After several years in the legal field in Massachusetts, she followed her dream of opening a business, with a focus on food inspired by her Moroccan family roots. She has been featured several times in the Boston Globe and other local Jewish press outlets. She lives in Brookline with her husband and three children. Learn more at her website or on Facebook.