A Mighty Wind in 35mm + The Commitments in 35mm Double Feature! 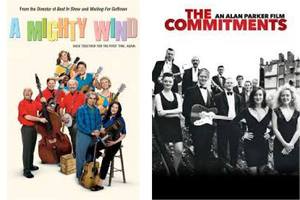 A Mighty Wind:
Written by Christopher Guest and Eugene Levy, and starring many familiar faces from Spinal Tap, A Mighty Wind is another mockumentary, this time a gentler teasing of the 60’s folk rock/protest song movement, bands such as the Kingston Trio, and hootenannies. My mom was a fan of this kind of music and when we saw this movie, she confirmed that they really nailed it. It’s the kind of parody that can only be done well by people so talented and versed in the particular genre of music. We kid because we love! Guest and Levy wrote all of the songs, and the other cast members played their own instruments.

Featuring the reunion of three fictional folk bands of the 60s: The Folksmen, The New Main Street Singers, and Mitch & Mickey; the bands gather for a tribute concert on a PBS type station.

There is chemistry and poignancy, particularly between Catherine O’Hara and Eugene Levy’s characters Mitch and Mickey, especially when performing their legitimately lovely song “A Kiss at the End of the Rainbow”. O’Hara and Levy (in character) performed the Oscar-nominated song at the 76th Academy Awards. The title song “ A Mighty Wind” won a Grammy for Best song written for a motion picture.

There is a layer of sadness to this movie that some people find lessens the typical humor of Guest’s films.

At various points in the 90’s, when Spinal Tap actually toured, Michael McKean, Harry Shearer, and Christopher Guests dressed up as the Folksmen and were the opening act, often getting booed off the stage by unknowing fans.

Fun Fact: When the film came out on DVD, the actors did a brief tour in character, playing at the Orpheum in 2003.

I was in junior high when The Commitments came out, and I was still discovering my own musical tastes. Looking back, I’m embarrassed by how much time the soundtrack of inferior covers of superior songs by the likes of Wilson Pickett and Otis Redding stayed in my Discman, but truth is, it led me to a lifelong love of soul music.

Directed by Alan Parker, The Commitments, is based on the 1987 Roddy Doyle book of the same name. The books are part of what is known as the Barrytown Trilogy: The Commitments, The Snapper, and The Van. All three were also made into films. I heartily recommend the hilarious books, and also their film counterparts.

The Commitments band are assembled by aspiring manager Jimmy Rabbitte who has big ideas and little money. He puts together a collection of working class Dubliners of varying degrees of talent to create a soul cover band. As with any band, there are inevitable tension, romances, fights, and heartbreak. You may spot Glen Hansard of Once fame in the band. The singer Andrew Strong was a 16 year old with a powerhouse voice that got much of the attention when the film was released.