A Hunanese Thanksgiving in Kendall Square 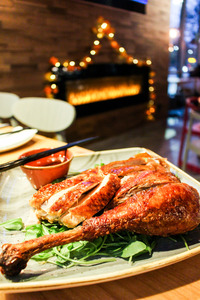 Whether feasting for Thanksgiving or Friendsgiving, group dining is made simple with Sumiao’s trio of prix fixe-style menus. Each menu starts with Melted Gold Soup with pumpkin and millet. Moving onto the appetizer course (Sumiao Shang Gan, Scallion Pancake or Spicy Dried Baby Fish), groups of four pick one while groups of six choose two, and eight select three. Each guest then can choose one sharable entrée from a selection of 12 signature vegetable, seafood and meat dishes like the Spicy Cauliflower, Red-Braised Pork Belly or Steamed Duijiao Tilapia. Each group also gets a complimentary order of one of the a la carte specials featured on these two days.

Lastly, during the week of November 20-27, Sumiao Hunan Kitchen will get social by offering up interactive lottery drawings, a special “thank you” gift to their guests. Follow @SumiaoHunan on Facebook, Instagram and Twitter, show a Sumiao team member, and draw from coupons that will score you 5-25% off the food bill on your next visit.