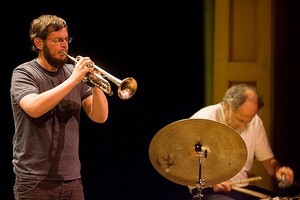 “…But Lytton and Wooley share an interest in sound-of-itself, resisting neither the urge toward momentum nor necessarily the impulse toward climax. Their (“Broken Research”) recording is a fleeting attack against the senses, a finely-honed twenty-six minutes ranging from small, close-mic'd movements to a mouse fight in the utility drawer”. All About Jazz.
“…their shared aesthetics have made the (now twelve) year partnership one of the most exciting in contemporary improvisation. Each musician defies his respective instrument’s conventional vocabulary. Lytton is as likely to use his junk-festooned kit to stop time as he is to keep it, and Wooley often incorporates outboard accoutrements and extended techniques to obtain coarse but pliable textures. The duo’s unusual sounds are means, not ends”. Chicago Reader, 2015.

Nate Wooley: “I decided... that I would invest in the creation of long-term musical projects that would push me physically and conceptually as well as confront the public's view of my work as being jazz-based…”.

Paul Lytton; “British percussionist Paul Lytton secured his place in the firmament of free improvisation more than 40 years ago, and he remains one of the most original and probing players ever to abandon the traditional rhythmic role of the drums in favor of texture and abstraction. By extending his kit with a phalanx of found objects, ad hoc devices, and metal percussion from around the world as well as with jury-rigged electronics, he creates tangled, engrossing fields of sound—frictive, harsh, sibilant, resonant—that let him go head-to-head with saxophonists, pianists, and the like rather than simply serving as a timekeeper or accompanist. That said, Lytton has always been skilled at driving music forward…” Chicago Reader