A Consort to Delight: English Renaissance Music for Broken Consort 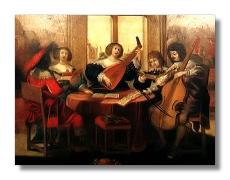 The “broken” consort, a type of ensemble made up of wind, bowed and plucked instruments, became popular in the age of Queen Elisabeth I, and it was the first ensemble to have music composed for a specific orchestration. The combination of different instrumental colors, from renaissance flute to gut-strung bowed instruments to steel and brass-strung plucked instruments, made a cheerful sound that delighted the Elisabethan and Jacobean courts. Music by many of the best and most popular composers of that time, including Dowland, Byrd, Morley, and Allison, was set for broken consort. Come see and hear some unusual instruments, playing court dances, fantasies and ballads, including John Johnson’s hit tune “A Pavan to Delight”!

Na’ama Lion is well known in the Boston area as a versatile performer on historical flutes. James Williamson plays early strings and sings tenor in a variety of groups in the Boston area. Matthew Wright and Peter Lehman play many different lutes and other plucked strings, and collaborate with a number of early music and other groups (even bluegrass!) Lutenist Olav Chris Henriksen and viola da gambist Carol Lewis perform frequently with ensembles in the U.S. and abroad, including Capriccio Stravagante (Paris) and the Boston Camerata.