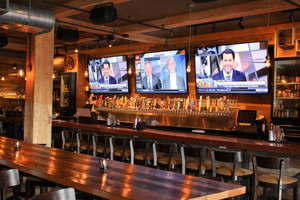 The countdown to New Year’s Eve is on and whether 2017 was a banner year or one you’re looking happily at putting in the past, City Tap House in Fort Point has plenty to celebrate on its exact one-year anniversary. The Fort Point beer paradise invites lovers of all thing “craft” to join them as they raise a glass (or sixty – one from each tap) to ring in the New Year on their paper anniversary with some of their favorite memories from their first year in Boston. But first, a night dedicated to “The Diet Starts Next Year” and after, suit up in your jammies for a New Year’s Day “Onesie Recovery Brunch.”

THE DIET STARTS NEXT YEAR – December 30:
Resolutions. Who can live with them, or without them? Well on this night, focus on the now. All day and all night, City Tap will be dishing out specials oozing with shameless guilty pleasure: Cheeseburger Pizza ($15), Buffalo Chicken Fried Mac & Cheese ($11) and a Cookie Dough Smash ($10).

ONESIE RECOVERY BRUNCH – January 1:
The next day, roll out of bed, say hello to 2018 and head back to City Tap in your best onesie pajamas for a recovery brunch featuring hangover remedies in the form of pancakes with sugary toppings and breakfast cocktails to keep the party going.

Cheers to starting the New Year with no regrets, and lots of beer.