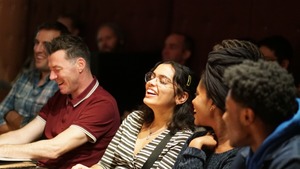 Address is 730 Massachusetts Avenue, Cambridge. Location is called the 730 Tavern, Kitchen and Patio

730 Tavern is located a minute walk from the Central Square stop on the Redline.

Street and metered parking are available.

Use Eventbrite to reserve your seats!