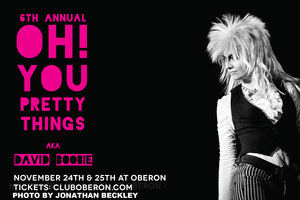 
A Live Music and Burlesque Tribute to David Bowie
Instead of shopping on Black Friday, come worship at the church of Bowie.
All the Burlesque you want, all the Bowie you need

"Luparelli's Bowie tribute show must be seen to be believed” -Telegram.com


Black Friday is approaching once again, which means it's time for the glorious return to Cambridge of Bowie-flavored striptease. Niki "Stardust" Luparelli and her Total Blam Blam David Boobie Band bring back to Oberon their lascivious tribute to the Thin White Duke and the female form.

Rather than pushing through the market square on Black Friday, driving like a demon from station to station, and running wild through a million dead-end streets in search of Christmas bargains, you should instead spit in the eyes of fools, put on your red shoes, and run to the centre of things—Club Oberon, that is—where each table offers a seat with the clearest view, and femme fatales emerge from shadows, disrobing to the best of Bowie, all night long.

"Marilyn Monroe impersonator and jazz chanteuse Niki Luparelli has been doing Bowie tributes since 2009, and this is her second time bringing the enchanting show to the Metropolitan Room. Also a standup comic, Luparelli peppers her sets with jokes and asides that put her in the top tier of nightclub performers" -Village Voice

"Some of us are looking for something a little more glamorous to do on Friday. Take a trip through the eclectic songbook of David Bowie with Niki Luparelli and The Gold Diggers" - Boston Magazine

“Chanteuse Niki Luparelli and her Gold Diggers kick off the post-Thanksgiving weekend with some wham-bam-thank-you-ma’am…This tribute will be somewhere between 3 and 3 million times more fun than circling a mall parking lot.” - Boston Herald

“Whether you are a young American or in your golden years; a diamond dog pull out of an oxygen tent or a cat person putting out the fire with gasoline; the prettiest star or a spider from mars; a scary monster or a super creep; you would be a lad (or lassie) insane if you didn't experience the sound and vision of Niki Luparelli as she tears through the David Bowie songbook. “ -Telegram.com

“Want to see Bowie done cabaret style? We’re pretty sure that no one’s better for that than Niki.”– BostonBandCrush.org

"’Boston's bustiest chanteuse' trains her headlights on dear David Bowie (backed by her retro band, the Gold Diggers) in an evening of cabaret-rock crossbreeding." - Time Out New York


What Actual Celebrities are saying about Niki!