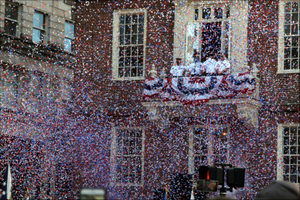 Boston City Hall Plaza Assembly: Boston’s Official Independence Day Commemoration!
The event is preceded by activities at City Hall Plaza usually starting at 9:00 a.m. at which time the Mayor of Boston speaks to those assembled. A parade from City Hall Plaza to the Old State House follows.

Wreath Laying Ceremony at Granary Burying Ground
The parade stops at the Granary Burying Ground on Tremont Street to allow officers and officials to lay wreaths at the graves of the patriots. Interred on the site are three signers of the Declaration of Independence–John Hancock, Samuel Adams and Robert Treat Paine. Paul Revere, Peter Faneuil, Benjamin Franklin’s parents and the Boston Massacre victims graves are also here.