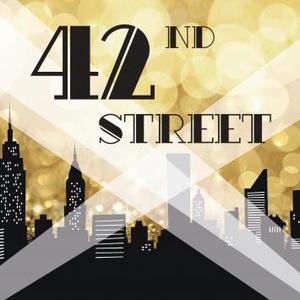 In the inaugural season of The Umbrella Stage Company — Greater Boston’s newest professional theater — the award-winning Performing Arts Program of The Umbrella looks forward to sharing an expanded, six-show season of bold, daring and innovative theater with you! From high-kicking spectacle to punk rock musical to socially urgent drama, this season will be the first to be staged in The Umbrella’s brand-new, state-of-the-art, multitheater performing arts wing at 40 Stow Street in Concord.

The grand-opening production in our mainstage space is a moment to celebrate, and 42nd STREET is nothing short of the greatest celebration of musical theatre and the people who make it happen!

Aspiring chorus girl Peggy Sawyer comes to the big city from Allentown PA, and soon lands her first big job in the ensemble of a glitzy new Broadway show. But just before opening night, the leading lady breaks her ankle. Will Peggy be able to step in and become a star? Splashy and grand, this tap-dance fueled musical is a visual feast…is the ultimate showcase for the capabilities of The Umbrella’s new main stage.

COMING FROM OUT OF TOWN?

Why not make a night of it right here, in the heart of the historic Concord Center Cultural District, with meal and lodging deals offered by our #DinnerAndAShowConcord Hospitality Partners including Trail’s End Cafe, Concord’s Colonial Inn, Adelita, Best Western and more! See http://TheUmbrellaArts.org/Partner-Offers