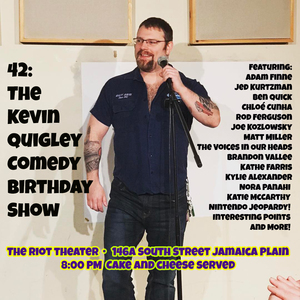 Your pal Kevin Quigley has been busy the last few years, inventing and producing comedy shows of every stripe and type all over the Boston Metro area. Now, just in time for his birthday, he wants to celebrate life, the universe, and everything by mashing up every show he runs and make one über-funny megashow for the ages. And he wants you all to come along! Partially because he rented the space and needs to pay the guy back!

Don't miss this one-of-a-kind comedy extravaganza and celebrate maximum hubris with me!