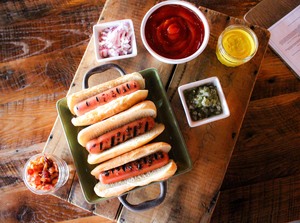 City Tap House is ready to hit it out of the park this Opening Day. On April 9, the Fort Point beer paradise will put the infamous Fenway Frank in the spotlight as they feature a duo of gourmet twists on the ballpark staple. For $3 each, there is the Buffalo Dog, an all-beef hot dog topped with bleu cheese crumbles, buffalo sauce and scallions and the Teriyaki Dog, an all-beef hot dog smothered in caramelized onions and teriyaki sauce. City Tap also will dish out Loaded Waffle Fries crisped to perfection and slathered in cheese, bacon, tomatoes, scallions and sour cream ($14). Wash the guilt-heavy treats down with specialty brews from Samuel Adams including ’76 available by the can, Sam Summer and 26.2 on draught.

It is predicted that baseball fans will eat more than 19 million hotdogs in the 2019 season so there is no time like the present to put a dent into that lofty goal in honor of Boston’s 120th Opening Day. The 2:05pm game against the Blue Jays will be on – with sound – in all its glory on City Tap’s 11 HDTVs, including three mammoth 80” screens that line the bar’s 60 tap lines. Let’s play ball!