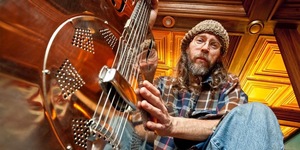 Doors open at 7:30pm and the show begins at approximately 8:00pm
Charlie Parr is singer, guitarist and banjo player from Duluth, Minnesota. His playing reflects a lifelong fascination with early 20th century blues and gospel music. The depth and humanity of his playing set him apart, and his compelling performances have made him an audience favorite throughout the US and Europe.
Few modern musicians playing roots music live those roots like Parr. His heartfelt, plaintive original folk blues and traditional spirituals don’t strive for authenticity: they are authentic. It’s the music of a self-taught musician who grew up without a TV –– but with his dad’s recordings of American greats like Charley Patton, Lightnin’ Hopkins, Memphis Minnie and Woody Guthrie. With his scraggly hair, father-time beard, thrift-store workingman’s flannel and jeans, and emphatic, throaty voice, Parr looks and sounds like he would have fit right into Harry Smith’s “Anthology of American Folk Music.”
Parr’s inspiration is drawn from the alternately fertile and frozen soil of Minnesota; his songs exude a Midwestern sensibility and humility. Parr grew up in the Hormel meatpacking city of Austin, MN (population 25,000) where the world's favorite tinned meat, Spam, is still manufactured. The combination of growing up with both of his parents working proud union jobs in an industrial meat factory and his largely rural environment had a profound impact on Parr.
"Every morning you'd hear the [factory] whistles blow, and they had the stockyards and animals there, so you were surrounded by this atmosphere," Parr says. Out the back door were soybean fields, as far as the eye could see. "As a kid I thought it was kind of boring, but now I go and visit my mom and I think it's the most beautiful landscape there is."
All of this comes to bear in Parr’s music, which is unfailingly simple, real and direct. He’s a blues player but, like all great musicians, what he does is ultimately less about genre than it is about soul. And, in the end, soul is exactly what makes Charlie Parr such a generous, compelling performer.
Beverages are included in the ticket price, non-alcoholic for everyone, and beer & wine to those 21+.