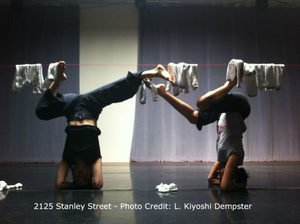 2125 Stanley Street is a performance installation exploring notions of home. Working with collaborators Margaret Paek and Loren Kiyoshi Dempster, choreographer and dancer Dahlia Nayar examines “home” as an archaeological site where minimal artifacts offer points of departure for the re-imagination and reconstruction a domestic space. We excavate the everyday and the mundane in search of a poetic consciousness. Household objects transform into potential sources of revelation and reflection. Basic tasks are infused with virtuosity and nostalgia. Fragmented lullabies and nursery rhymes create an evocative soundscape. Ultimately, the installation invites the audience into a home that unfolds through movement and sound, a home that exists in the present moment through intimate exchange, a home that is is both familiar and yet cannot exactly be located.

2125 Stanley Street received a 2015 Best of Stage and Screen award from Downeast Magazine who noted “2125 Stanley Street gorgeously explore domesticity and notions of home using mops, laundry, and other domestic props in beautiful and unexpected ways.”

This residency is co-sponsored with the BU Arts Galleries and the BU Dance Program.

This event is free, but you must RSVP. Space is limited.

The presentation of 2125 Stanley Street was made possible by the New England Foundation for the Arts’ National Dance Project with lead funding from the Doris Duke Charitable Foundation and the Andrew W. Mellon Foundation.

Dahlia Nayar’s multimedia work investigates the performance of the quiet and seeks unlikely sources of virtuosity. Her most recent work, 2125 Stanley Street, has been supported by a Vermont Performance Lab residency, a Bates Dance Festival New England Emerging Choreographer Residency, a National Dance Project Special Grant and a National Dance Project Touring Award for 2016-17. Stanley Street has been adapted for galleries, grange halls, a Buddhist church and other alternative spaces throughout the United States. Previously, Dahlia’s work has been selected and performed at venues including the Venice Biennale/Danza Venezia Showcase for Emerging Choreographers, Dance Place in Washington DC, the Next Stage Dance Residency at the Kelly Strayhorn Theater in Pittsburgh, the Center for Performance Research in Brooklyn, NY. In addition, her site specific projects have been performed at the National Botanical Gardens, the Kennedy Center and the Complejo Cultural, in Puebla, Mexico. She was a National Dance Project Regional Dance Lab artist in 2007. From 2008-2010, she received the Jacob Javits Fellowship during which time she received her MFA in Dance/Choreography from Hollins University. She has been a guest artist at several universities including: Salem State College, College of the Holy Cross, Long Island University in Brooklyn, Marymount Manhattan College, Duke University, Smith College and others.

Margaret Paek is a New York based collaborative dance artist who sees dance as a life practice. A Lower Left associate since 2000, she is also influenced by her relationships with contact improvisation, gymnastics, Ensemble Thinking, Alexander Technique, projectLIMB, Dahlia Nayar, Deborah Hay, Barbara Dilley, musician/composer Loren Kiyoshi Dempster and their daughter. Margaret has also enjoyed creating with Stochastic Ensemble (co-founder,) projectLIMB, Team Djordjevich, BodyCartography, Keith Hennessy, Lionel Popkin, and Mary Overlie among others. Her work has been presented in Germany, Hungary, Mexico, Switzerland, across the U.S., and at New York venues including the Whitney Museum Biennial 2012, Judson Church, Danspace at St. Mark’s Church, and Joyce SoHo. As the practice of teaching is integral to her creative process, she is faculty at Movement Research, Marymount Manhattan and Manhattanville Colleges and has taught at festivals in Budapest, Berlin, Freiberg, and Stockholm. Margaret has authored articles for Contact Quarterly and learning to loveDANCE more. She is on the board of Marfa Live Arts and Movement Research’s Artist Advisory Council and received her MFA from Hollins University/ADF.

Loren Kiyoshi Dempster (composer) uses a combination of computer, electronics, cello and extended techniques to create and perform music. An active chamber musician, composer, and improviser he performs with the Dan Joseph Ensemble, Trio Triticali, and Left Hand Path among many others. Ever interested in the relationship of movement and sound, he has recently performed for choreographers Jonah Bokaer, Chris Ferris, Margaret Paek, and projectLIMB. Dempster toured often with Merce Cunningham Dance Company playing music for many pieces starting in April 1999 until December 2011. His performances for Interscape, which uses John Cage’s solo cello work “one eight” were described by the New York Times (04/01), “Dempster’s playing was outstanding, suggesting a one-man orchestra through texture that produced overlapping sounds that ranged from the jagged to a warm warbling.”