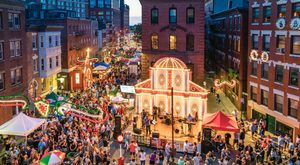 • 101st Madonna Della Cava Feast
Fri, 8/6 – Sun, 8/8
On the second week of each August, the North End celebrates the Feast of Madonna Della Cava, which coincides with the festival held in Pietraperzia, Sicily.

• 111th Anniversary of the Fisherman's Feast
Thu, 8/12 – Sun, 8/15
The Fisherman's Feast is an annual event that began in Boston in 1910 and is based on a tradition that goes back to the 16th century in Sciacca Sicily. It is Boston's oldest continuous Italian festival.

BONUS: Not in the North End, but the 96th Annual Italian Feast of Saints Cosmas & Damian in East Cambridge is worth checking out.