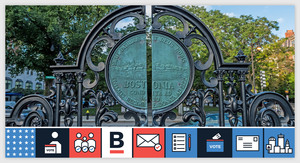 The 2021 Boston mayoral election will be held on Tuesday, November 2, 2021, to elect the mayor of Boston, Massachusetts.

Entering 2021, then-incumbent mayor Marty Walsh was eligible to seek a third term, but he resigned as mayor on March 22, 2021, upon his confirmation as United States Secretary of Labor in the Cabinet of Joe Biden. Because of the vacancy in office, the winner of the mayoral election will be sworn-in as soon as is conveniently possible once the results of the general election are certified.

Since more than two candidates have qualified for the ballot, a non-partisan preliminary election, is scheduled for September 14 in order to determine which two candidates will make the general election.

Boston is also holding elections for its 13 city council seats—nine elected by district and four elected citywide—in 2021. Five seats are open, with the four incumbents above running for mayor and a fifth not seeking re-election. The Boston Globe's Jasper Goodman wrote that the council was "in line for the most turnover it has seen in a single election since 1993." Learn more: