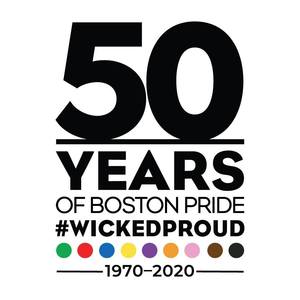 The Official Kick-Off to the 50th annual Boston Pride Week. This event will be LIVE streamed.

We’ll open up Pride with our traditional Flag Raising at City Hall. Even though we won’t be able to gather in person, we’ll be able to watch our mayor, elected officials, and the Boston Pride Board speak about what Pride means to the City of Boston, and why we’re still #wickedproud.

Gov Baker, Mayor Walsh, Liz Malia, and Malcolm Carey will be among those speaking. The National anthem will be sung by Davron Monroe.

This event will be LIVE streamed:

Davron S. Monroe is a Boston based award winning singer and actor with vocal talents that run the gamut from Opera to Musical Theatre, gospel to jazz and everything else in between. Davron is the 2019 recipient of The Elliot Norton Award for Outstanding Musical performance in Breath and Imagination the story of Roland Hayes, African-American classic concert artist (who was also a Boston based artist in the later years of his life). Other performances of note include Murder on the Orient Express, The Wiz, Camelot, Company, My Fair Lady, City of Angels, Sweeney Todd, One Man, Two Guvnors, The Mikado, Avenue Q, and Ain’t Misbehavin’ (Lyric Stage Co.), The View Upstairs (Speakeasy Stage) The Little Mermaid, RAGTIME (Company Theatre), Man of La Mancha (New Rep), Caroline or Change, Godspell (Moonbox Productions), Hairspray (Reagle Music Theatre), Dreamgirls, Jesus Christ Superstar, Children of Eden, Songs for a New World (premiere, Key West Symphony, Broadway Across America), Smokey Joe’s Café, Cinderella, Streakin’!, a ’70s musical revue, and Sweet Charity. Davron has also appeared with many orchestral and vocal organizations, such as Boston Landmarks Orchestra (Lost in the Stars – a celebration of the 50th Anniversary of the “I Have a Dream” speech, and The Chariot Jubilee), Brevard Music Center, Finalist in the Orlando Opera’s Heinz Rehfuss Singing Actor Awards, Disney Entertainment’s Voices of Liberty, South Florida Symphony, Houston Ebony Opera Guild, the New England Spiritual Ensemble and many other organizations throughout the greater Boston area. Davron was the first recipient of the Bob Jolly Award for local actors. Future engagements include Jelly’s Last Jam- Story of Jelly Roll Morton African-American Jazz pioneer and 25th Annual Putnam County Spelling Bee, Both with New Repertory Theatre Company 2021.

The Boston Gay Men’s Chorus is one of New England’s largest and most successful community-based choruses. Founded in 1982, the 200-voice ensemble is celebrated for its outstanding musicianship, creative programming, and groundbreaking community outreach. Under the dynamic leadership of Music Director Reuben M. Reynolds III, the BGMC sings a wide spectrum of classical and popular music and creates social change by providing a positive, affirming image of the gay and lesbian community. The Chorus is heard live by more than 10,000 people each season and thousands more through recording, television and internet broadcasts. CBS-WBZ named the Boston Gay Men’s Chorus one of the “top 5” choruses in the city of Boston. The Boston Business Journal in 2018 and 2019 named BGMC one of the top 10 performing arts organizations in the city. BGMC is a Cultural Ambassador — being the first LGBTQ+ chorus to perform in Poland in 2005, the Middle East in 2015 and in South Africa in June 2018.