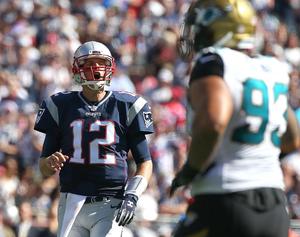 Last month, Patriots-at-Steelers was the game of the year in the NFL. This month, a rematch at Gillette Stadium was expected to be the most important game of the postseason in the AFC, with a trip to Super Bowl LII at stake.

It won’t happen now, though, because someone forgot to inform the Jacksonville Jaguars.

New England held up its end of the bargain Saturday night by throttling the Tennessee Titans, but Pittsburgh – for the second time this season – saw the visiting Jags humiliate them at Heinz Field in a Divisional Playoff contest filled with big plays from both teams.

By doing so, upstart Jacksonville, the No. 3 seed in the AFC, punches a ticket to Foxborough to meet the reigning Super Bowl champs next Sunday at 3 p.m. Eastern.

In two games this postseason, the Jaguars have been wildly inconsistent. At home versus Buffalo in the Wild Card round, they managed to score just 10 points in a narrow victory over the Bills. Traveling to the frigid Steel City this weekend, though, Jacksonville looked like a completely different, more confident club, putting 38 points up offensively and adding another seven on a defensive fumble return for a touchdown.

Against Pittsburgh, Jacksonville’s offense relied on its strong ground attack most of the afternoon, with rookie rusher Leonard Fournette gashing the Steelers for more than 100 yards and three touchdowns. Fournette had to leave the game temporarily with a right ankle injury, but managed to return in the second half. His health status will be a key factor to monitor in the week ahead.

Jaguars QB Blake Bortles also looked more in control of his offense than he did a week earlier, keeping his composure in the pocket and finding open receivers in critical situations.

On the other side of the ball, the Jags were able to pressure Pittsburgh QB Ben Roethlisberger mostly by rushing just four players and dropping their other seven in pass coverage. This frustrated Roethlisberger for much of the day and created a pair of turnovers that the Jaguars converted into touchdowns.

Jacksonville’s secondary made several big stops as well, although the Jags appeared vulnerable in the back end on a number of deep throws by Roethlisberger, including two long touchdown throws on 4th downs.

Which Jaguar team will come to New England a week from now? The sloppy, stagnant team that barely escaped Wild Card Weekend, or the opportunistic group that had all the answers against the Steelers?

The Patriots now have seven days to prepare for an unfamiliar opponent – one that almost no one predicted would be in this enviable position.