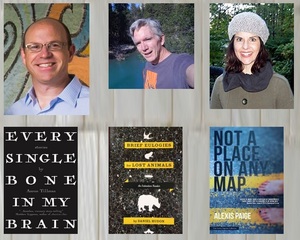 Aaron Tillman is a fiction writer, Associate Professor of English at Newbury College, and Director of Newbury's Honors Program. His short story collection, Every Single Bone in My Brain, was published by Braddock Avenue Books in July of 2017. Aaron received a Short Story Award for New Writers from Glimmer Train Stories and won First Prize in the Nancy Potter Short Story Contest at University of Rhode Island. Two pieces of his flash fiction were nominated for inclusion in The Best Small Fictions of 2015 anthology, and his novel was a finalist in the 2016 Molly Ivors Prize for Fiction. His stories have appeared or are forthcoming in Mississippi Review, Glimmer Train Stories, Sou'Wester, upstreet, The Tishman Review, The Madison Review, Arcadia Magazine, The Carolina Quarterly, great weather for MEDIA, Prick of the Spindle, Burrow Press Review, and elsewhere. He has recorded two stories for broadcast on the Words & Music program at Tufts University and another for Functionally Literate Radio. His essays have appeared in The Writer's Chronicle, Studies in American Humor, Symbolism, The CEA Critic, and The Intersection of Fantasy and Native America (Mythopoeic 2009).

Originally from Canada, Daniel Hudon is an adjunct lecturer in astronomy and math. He is the author of popular astronomy book, The Bluffer’s Guide to the Cosmos (Oval Books, UK), a chapbook of prose and poetry, Evidence for Rainfall (Pen and Anvil) and a new book about the biodiversity crisis, Brief Eulogies for Lost Animals (Pen and Anvil). He lives, teaches, writes and dances Argentine tango in Boston, MA.

Alexis Paige writes and edits from a converted farmhouse pantry in rural Vermont. Winner of the 2016 Vine Leaves Press Vignette Collection Award, her first book, NOT A PLACE ON ANY MAP, was published in late 2016. Her essay, “The Right to Remain,” was named as a Notable in the 2016 Best American Essays anthology. Paige's essay, "Syringa Vulgaris," an elegy for what one loses to rape and an ode to what remains, appears in the 2017 anthology A SECOND BLOOMING: BECOMING THE WOMEN WE ARE MEANT TO BE, alongside literary heroes Mary Karr and Anne Lamott, as well as many other fine contemporary essayists. Essays and other work appear in multiple anthologies and journals, including The Manifest Station, Hippocampus, the New Madrid Journal, The Pinch, The New Mexico Review, Passages North, Fourth Genre, The Rumpus, Pithead Chapel, 14 Hills, and on Brevity’s blog, where she serves as Assistant Editor. Her essays have been featured on Freshly Pressed and Longform, nominated for Sundress Best of the Net, and nominated three times for the Pushcart Prize. In 2013, Paige won the New Millennium Writings Nonfiction Prize for her essay "The Geography of Consolation." Twice a top-ten finalist of Glamour Magazine’s essay contest, Paige holds an MA in poetry from San Francisco State University and an MFA in creative nonfiction from the University of Southern Maine. In addition to editing and publishing, Paige teaches literature and writing at colleges and universities throughout New England and speaks widely at national writing conferences. She served as visiting artist at Saint Lawrence University in 2014, and as writer-in-residence at Bay Path University in 2015. She lives along the First Branch of the White River in Central Vermont with her husband and their two dogs, Jazzy and George

Reddit
03/11/2017 19:00:00 03/11/2017 20:30:00 America/New_York 200th Dire Litearary Series with Tillman Paige and Hudon Aaron Tillman is a fiction writer, Associate Professor of English at Newbury College, and Director of Newbury's Honors Program. His short story collection, Every Single Bone in My Brain, was publis... Out of the Blue Too, Cambridge, Massachusetts 02135 false DD/MM/YYYY