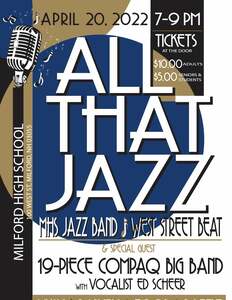 The 19-piece Compaq Big Band with Vocalist Ed Scheer is thrilled to be performing at Milford High (NH) High School’s ‘All That Jazz’ night on Wednesday April 20th. The group has risen to prominence throughout New England as one of the most accomplished full-size big bands in the region, featuring a cookin’ rhythm section and 14 horns that achieve an ultra-tight sound, with terrific instrumental soloists. To complement this high-powered ensemble, they showcase a rotation of talented jazz vocalists. While they’re faithful to traditional Swing Era classics, they really dig their chops into challenging swing and jazz arrangements played by the most approachable yet progressive big bands of the last four decades.

Appearing prior to the Compaq Big Band will be the accomplished West Street Beat vocal group and the MHS Jazz Band, beginning at 7:00pm. We’ll be on for the last set, featuring ‘Band’s Best Friend’ vocalist Ed Scheer, from about 8:00pm-9:00pm.
Tickets are just $10 for Adults, and only $5 for Seniors and Students! Doors open 6:30pm, and all seating is General Admission. There’ll be a free buffet assortment of light refreshments, ‘mocktails’, and soft drinks. You can listen the night away – but they'll have space for dancin’, too. Milford High School is located at 100 West Street.

This great event is presented by the Spartan Music Boosters, who work tirelessly year-round to support the Marching Spartans, West Street Beat, Jazz band, Concert Band and Chorus! All profits from tickets and a raffle that evening go to scholarships, uniforms, t-shirts, and much more.

Our set at ‘All That Jazz’ will showcase Ed Scheer, the founder and front man for Boston’s 'The Love Dogs', New England’s preeminent jump blues, jump swing, New Orleans R&B, and just-plain-fun band. Whether it’s in front of his group, sitting at the drum kit, or freelancing throughout Greater Boston in both roles, Ed is THE consummate professional. He’ll be croonin’ out favorites as arranged for Frank Sinatra, Bobby Darin, Michael Buble, plus some exclusive full big band arrangements of hits from ‘The Love Dogs’ done by our own Scott Tringali.

And if THAT’S not enough, the band will sprinkle in a few instrumental features from names such as Gordon Goodwin, Chris Walden, Tom Kubis, Callum Au, and Sammy Nestico.