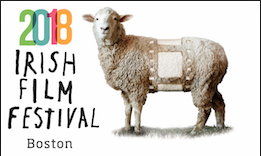 The Irish Film Festival, Boston (BIFF) returns to the historic Somerville Theatre for its eighteenth annual celebration of Irish film in Massachusetts from Thursday, March 22 through Sunday, March 25, 2018. Renowned for its programming, parties and post-screening Q&As, unlike many film festivals, the Irish Film Festival announces it awardees prior so that filmmakers can attend their screenings in the U.S.

Breakthrough feature Kissing Candice kicks off the Festival on Thursday evening. An edgy independent film that just had its European premiere at the world-renowned Berlin Film Festival, Kissing Candice is a coming of age drama. Candice longs to escape the boredom of her seaside town, but when a boy she dreams about turns up in real life, she becomes involved with a dangerous local gang. Its showing at the IFF will be its U.S. premiere.
The Breadwinner, the recipient of the Special Jury Prize, is a 2018 Oscar-nominated animated drama film by Cartoon Saloon directed by Nora Twomey and executive produced by Mimi Polk Gitlin and Angelina Jolie. It’s based on the best-selling novel by Deborah Ellis and will be shown Saturday.
It’s Not Yet Dark is a documentary about the groundbreaking story of Simon Fitzmaurice, a talented young Irish filmmaker with ALS (MND), as he embarks on directing his first feature film through the use of his eyes and eye gaze technology. This film is co-presented with REELAbilities and is a fundraiser for ALS TDI on Sunday.
The U.S. premiere of Noel Hill: Broken Dream closes the Festival on Sunday evening. Directed by Paddy Hayes, it is a searing portrait of one of Ireland’s most renowned traditional musicians, concertina player Noel Hill, as he recovers from a serious assault that left him a battered shadow of his former self.

A unique and science-focused addition to this year’s Festival is the Global Vision Documentary The Farthest. This 2017 documentary, directed by Eimear Reynolds, will be shown Saturday in cooperation with MIT, STEM on Stage, and Women in Film & Video New England (WIFVNE), which promotes proactive images of women and works to empower all women in the media industry to achieve their professional potential. The story told in this documentary is quite compelling: More than 12 billion miles away a tiny spaceship is leaving our Solar System and entering the void of deep space - the first human-made object ever to do so. Slowly dying within its heart is a nuclear generator that will beat for perhaps another decade before the lights on Voyager finally go out. But this little craft will travel on for millions of years, carrying a Golden Record bearing recordings and images of life on Earth. In all likelihood, Voyager will outlive humanity. The Farthest celebrates these magnificent machines, the men and women who built them and the vision that propelled them farther than anyone could ever have hoped. There will be a post-screening panel featuring the director, members of WIFNE, MIT and STEM on Stage.

Friday brings a spotlight on Northern Ireland with Director’s Choice Feature Maze being shown in its New England premiere. This film is inspired by the true events of the infamous 1983 prison breakout of 38 IRA prisoners. Also a part of the Northern Ireland program on Sunday, Award-winning documentarian Alex Gibney (Mea Maxima Culpa: Silence in the House of God) reopens the case of the unresolved Loughinisland massacre in Northern Ireland with No Stone Unturned.

Saturday begins with a family-friendly showing, in partnership with The Family Backpack, of Song of the Sea. Saturday continues with the first of two short film programs – one on Saturday and one on Sunday. In total, 20 shorts, eight of which have female directors, will be featured. However, the Most Inspiring Short Bless Me Father will be shown with Kissing Candice. Director’s Choice Short Lost Memories will screen with Maze and QED will be shown with the feature film The Limit Of.

Saturday continues with the documentary entitled In the Shadow of the Glen, directed by Seán Ó Cualáin, which tells the plight of his village as he follows a year in the life of the people of Loch Con Aortha in west Conamara. Understanding that the Gaelic civilization to which they belong has disintegrated, they strive to protect and preserve their identity as they come to the realization that if they themselves cannot save their village, perhaps they can save its heritage. Pull like a Dog, another story from a small village in south west Ireland, is about Gary and Paul O’Donovan, two young rowers who came from nowhere to become household names after bolting their way to silver medal success at the Rio Olympics. The film has a local Massachusetts connection with the Head of the Charles Regatta being featured as the two get ready to compete on the world stage.

“It’s remarkable to see the way Irish cinema has evolved over the years, particularly in the past year alone,” said Dawn Morrissey, executive director of the Irish Film Festival. “Parity within the Irish film industry is very apparent in our program this year as we showcase the work of eleven female directors, a first for the Festival. This is in part due to the Irish film board’s gender and diversity program, part of their strategic plan which aims for 50/50 parity for funding Irish film projects within five years.”

“Irish filmmakers from around the world are really showing their talents in so many areas, and we cannot wait to share our innovative, and sometimes edgy, program with our attendees this year. We’re also delighted to host several of the filmmakers for Q&A events after their screenings,” added Morrissey.