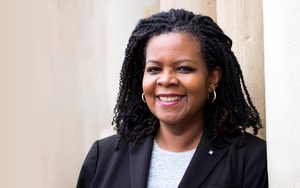 In anticipation of the A.R.T.’s upcoming revival of 1776 and the 250th anniversary of the signing of the Declaration of Independence in 2026, A.R.T. has invited various Harvard scholars to participate in a series of lectures and discussions around the history of our nation.

Hosted at various locations throughout Greater Boston, the 1776 Salon series dives deep into the stories of eighteenth-century historical figures left out of textbooks, explores new narratives leading up to and following the American Revolution, and closely examines the voices represented and absent within the Declaration of Independence.

As we approach the 250th anniversary of the founding of United States of America, it is worthwhile to consider what it means to be a citizen of the country that was created in 1776. Harvard Professor Annette Gordon-Reed explores the questions of how citizenship is expressed in this modern context, how we kept the republic, and what might the future hold for our republic.