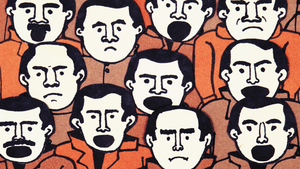 On Saturday, November 30th, MergingArts Productions celebrates the art of succinct visual storytelling with the 13th annual Short Short Story Film Festival at the new Acoustic Java Café & Microcinema, as a true Rhode Islander might say, “where the Cable Car used to be.”

The Short Short Story Film Festival includes live-action and animated films from across the globe, all of which tell a story in under six minutes. Audiences can enjoy two distinct programs of cultural excursions, each program about the length of a shorter feature film. With nearly three dozen films, directors from twenty countries on six continents are participating.

The first program, “Heartstrings,” screens at 1:00 pm and 6:00 pm. Heartstrings explores themes of aspiration and frustration, the challenges of aging, the struggle for acceptance, and unmasking hidden emotions.

The second program, “Headtrip,” screens at 3:30 pm and 8:30 pm. Themes include absurd quests, darker explorations of psychological manipulation, and surreal and often politically-charged satires are in the mix as well.

The competitive international film event includes audience voting for both programs, and DJ Madame B will be mixing soundscapes between and after screenings, with Acoustic Java’s kitchen open between screenings for a lunch or dinner break with café options made from scratch and locally and organically sourced, along with high quality, sustainable, fair-trade organic coffees and teas.