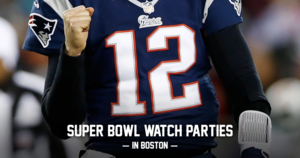 Are you wondering where to watch Super Bowl LIII? Here are 12 🐐 places to watch the Big Game on Sunday in/around Boston...

1) Wine Bowl hosted by Lamont Price ($15)
Boston-based comedian, Lamont Price, will be emceeing the party and doing standup sets throughout the night. The $15 ticket gets you into the party and access to an all-you-can-eat buffet.

4) KT&T Superbowl Party ($30)
Kirkland Tap & Trotter will be putting out an epic spread for the Big Game. $30 gets you access to a taco bar, KT&T burger sliders, Tony's Somerville-famous nachos, unlimited wings...and a suckling pig.

5) The Smoke Shop BBQ ($29+)
The Smoke Shop Cambridge and Shiner Bock are teaming up to host a Super Bowl LIII Extravaganza. $29 gains you access to a BBQ buffet loaded with all the fixin’s and desserts.

7) Super Bowl Wing Fest ($1/wing)
Pregame the Super Bowl via a "Wing Fest" at Dorchester Brewing Company. Try $1 wings from a variety of local restaurants. Stick around after for the game.

9) The Ultimate Super Bowl Party! (No cover)
Watch the Big Game on a giant projector screen while enjoying buckets on buckets of wings and beer.

11) Z-Park Super Bowl Party (No cover)
The Big Game on a cinema-like screen with free pizza, drinks, and snacks. Also, prizes for those who can guess the final score. Need we say more?

12) Your Couch (FREE)
Because nothing compares to the comfort of watching the Patriots on your own couch at home.