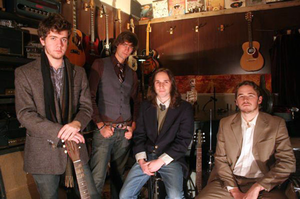 Grimis is the first band of childhood friends Lyle Brewer, Andy Doherty, Pete Michelinie and David Tanklefsky. Formed in their hometown of Andover, Massachusetts in 2001, the band made three records, toured the country and, in 2011, traveled to Kenya to make an album with the students at the Margaret Okari Children's School. Since slowing down the band in 2012, members have gone on to perform in many various projects including Frances Cone, the Ryan Montbleau Band and the Whiskey Treaty Roadshow. They return to the Middle East on12/22/17for their 10th annual Christmas show.Eleanor Bigsby is Boston's preeminent instrumental Beatles cover band. Started by guitarist Lyle Brewer, the band brings the musicality of the Beatles to life in new and varied ways. An accomplished solo guitarist who has shared stages with Lake Street Dive, Ryan Montbleau, Kimon Kirk and scores more, Brewer is joined by James Cohen on drums and a rotating cast of some of Boston's best musicians.A writer, a singer, a performer, the real Billy Keane is a folk musician for a new generation. His music combines compelling story telling and socially relevant lyrical poetry with melodies and accompaniments ranging from the energetic and heart-pumping to the introspective and achingly touching. He can be seen performing solo while stomping a kick drum to keep time, or as part of the notorious Whiskey Treaty Roadshow, a singer songwriter collaboration featured in an award winning documentary short.
Tickets:
http://www.ticketweb.com/event/10th-annual-holiday-extravaganza-feat-middle-east-upstairs-tickets/7915225?REFERRAL_ID=twfb