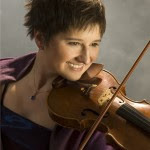 This second recital in the Bijou de la Vida Concert series is devoted to chamber music written during World War I. This concert reflects contemplation of the roots of humanity, and the search for everlasting values within national traditions in the context of the Great War. We will hear elements of despair, but also of perseverance, humor and optimism that are at the core of human nature. Works by de Falla, Janáček, Messiaen and more, as well as Stravinsky’s powerful ‘L’histoire du soldat’ for violin, clarinet and piano.

Featuring award winning violinist KLAUDIA SZLACHTA who has both performed and taught internationally. A Polish national, Ms. Szlachta was a scholarship recipient, earning her Bachelor of Music degree from Boston Conservatory, summa cum laude, with Professor Magdalena Suchecka Richter as her teacher, and her Masters and Doctorate of Musical Arts degrees at Boston University with Professor Yuri Mazurkevich. While there, she won both the Bach prize and the Concerto Competition, playing the Szymanowski Violin Concerto under the baton of David Hoose.
Upon graduation, Ms. Szlachta was invited by the Institute and Festival of Contemporary Performance in New York to perform Luciano Berio’s Sequenza and Elliott Carter’s Triple Duo. Recently, she returned to New York to give the World Premiere of “Six Miniatures”, composed for her by Thomas Weaver. Ms. Szlachta recently recorded music for a film entered in the Irish Film Institute’s Movie Festival, appeared in the prestigious Convergence Ensemble Chamber concert series, and showcased a new composition by Ketty Nez at the Festival of New Music in Florida. She has also had the privilege to collaborate on stage with Menahem Pressler and Joseph Silverstein, as well as tour the east coast as a memeber of the Amabile Trio and Hubbard Quartet, and appeared in a variety of venues such as Carnegie Hall, the Kennedy Center and Boston’s own Jordan Hall and Symphony Hall.

Locally, she performs on regular basis with the Cantata Singers and the Boston Modern Orchestra Project. Currently, Ms. Szlachta is on the faculty of the School of Music at Boston University, the New England Conservatory Preparatory School, the Intensive Care Project and BUTI’s summer program at Tanglewood. She is also the Director of the Violin Workshop at Tanglewood.