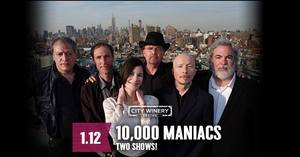 One of the most critically acclaimed bands of the last three decades, 10,000 Maniacs were founded by Robert Buck, Dennis Drew, Steven Gustafson, John Lombardo and Natalie Merchant in the fall of 1981. Jerry Augustyniak joined in 1983. Together with artists like R.E.M. they defined college rock and created the first wave of alternative rock bands and what became known as the alternative rock format on FM radio.

Writing and performing powerful, danceable and socially conscious original material in and around their hometown of Jamestown, New York the group toured extensively and produced two independently released records, Human Conflict Number Five (’82) and Secrets of the I Ching (’83) on their own Christian Burial Music label.

By producing, manufacturing and marketing their own recordings 10,000 Maniacs were the original “indie” band before signing with Elektra Records and making The Wishing Chair in 1985 with producer Joe Boyd (Fairport Convention, Nick Drake). After touring extensive with REM and though out Europe John Lombardo left the band in July of 1986 and the band continued as a 5 piece.

In 1987 the Maniacs recorded and released In My Tribe. Produced by Peter Asher (James Taylor, Linda Ronstadt) this album broke into the charts, where it stayed 77 weeks, peaking at #37 and selling over two million copies. In My Tribe featured the hit singles "Don't Talk," "Hey Jack Kerouac," "Like The Weather" and "What's The Matter Here?" It was voted one of the 100 most important releases of the decade by Rolling Stone Magazine.

1988 saw the band debut on national television with appearances on The Tonight Show, Late Night with David Letterman and Saturday Night Live.

Blind Man's Zoo, the 1989 follow-up, hit #13 on the Billboard charts and went platinum. It featured the hit singles, "Trouble Me and "Eat For Two."

The following world tour featured several European festivals, a string of US amphitheatres and the renowned Fourth of July concert with the Grateful Dead in front of 80,000 in Buffalo NY.

In 1990 the band released a compilation of their first two independent recordings called Hope Chest: The Fredonia Recordings along with a companion video entitled Time Capsule.

Our Time in Eden was released in 1992, and featured the hit singles, "Candy Everybody Wants" and "These Are Days". Rolling Stone’s four-star review called it a “…gripping new album …with a provocative, unnerving power.”

After the release of Our Time in Eden, Natalie Merchant announced that she was leaving for a solo career. MTV Unplugged was released a few months after her departure, featuring a remake of the classic, "Because the Night."

10,000 Maniacs continued without Merchant, bringing back John Lombardo and adding Mary Ramsey in 1994.

In November 1995, the Maniacs played dates in Cleveland and Chicago. The Cleveland Plain Dealer remarked of their Agora Ballroom show:

"The band showed a sold-out crowd the path to its surprisingly smooth and viable rebirth…Saddled with the unenviable task of filling Merchant's shoes, Ramsey brilliantly rose to the occasion"

The new lineup released Love Among the Ruins for Geffen Records in 1997, featuring a cover of Roxy Music's "More Than This," which went to #24 on the Billboard charts, the highest-charting single in the band's history.

The Chicago Tribune noted "If the 11 new singles rolled out are any indication of things to come, the new incarnation of 10,000 Maniacs may eclipse the old" and the Chicago Sun Times simply said, “Natalie Who?”

In December of 2000 founding member Robert Buck died at the age of 42. After a three-year hiatus the Maniacs returned in 2003 with long time friend and former guitar tech Jeff Erickson on lead guitar.

The band released, Music From The Motion Picture, February 2013 and available at www.maniscs.com

In April 2015 the band released a new album of traditional folk tunes from the British isles. Twice Told Tales, on Cleopatra Records, is available at www.maniacs.com or all the usual places.