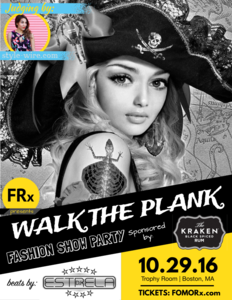 FOMO Prescription is taking the traditional Boston Halloween Party Costume Contest to the next level.

Watch 10 Boston designers battle it out Project Runway style to see who can create the best Pirate costume. Not only will the designers create out of this world costumes based on their interpretations of the theme Pirates, but they will have to “walk the plank” at the halloween party to show off their wares.

At stake is a $300 cash prize for the best costume, a feature on fomoprescription.com weekly email, and Halloween bragging rights across the city.

After the fashion show, DJ Estrela will spin the best in top 40, hip-hop, and electronic music for a fun party. Gather your friends, start crafting your costume, and get in the spirit of the Pirate nautical theme….arrrhhhhh

-General Admission to the Walk The Plank: Fashion Show
-First Access to the after party at Trophy Room