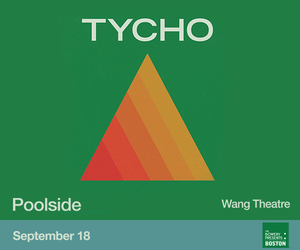 Tycho (Scott Hansen) is a producer and graphic artist based in San Francisco, California. While Boards of Canada's blissful/melancholic IDM is an obvious inspiration, many of Tycho's productions play out like complete electronic dream pop songs in isolation rather than vignettes or extended mood pieces. Tycho debuted in 2002 with The Science of Patterns, a self-released four-track EP. Sunrise Projector, his first album, was released in 2004 on the Gammaphone label. After the album was re-released on Merck in 2006 under the title Past Is Prologue, he settled in with Ghostly International, where he released a trio of singles and EPs ("The Daydream," "Adrift," "Coastal Brake") and provided artwork and graphic design under his visual artist moniker, ISO50. As with many Ghostly artists, Tycho's music received much exposure via Cartoon Network's Adult Swim late-night programming block and website, appearing as background and interstitial music during the network's broadcasts and being included on compilations such as 2008's Ghostly Swim.

In 2010, Hansen established a full-band lineup of Tycho, including guitarist and bassist Zac Brown, drummer Rory O'Connor, and bass guitarist/keyboard player Joe Davancens. The group became an incredibly popular live act, appearing at numerous festivals as well as headlining several sold-out tours. Tycho's long-awaited full-length Dive arrived on Ghostly in 2011, and was well received. While working on material and singles for his next LP, 2013 saw the vinyl reissue of Past Is Prologue on Ghostly. Awake, Tycho's proper follow-up to Dive, was released in early 2014, and was another success, charting at number 23 on Billboard's Top 200 albums chart, an unusual feat for an IDM album. Following two more years of constant touring and graphic design work, Tycho released Awake Remixes on Ghostly in early 2016, with a new studio album in the works. Later that year, the singles "Division" and "Epoch" preceded the full-length Epoch, which was given a surprise release that September. The album was nominated for Best Dance/Electronic Album at the 2017 Grammy Awards.