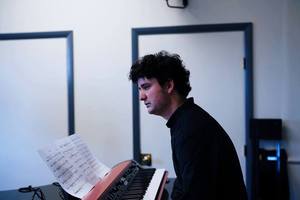 Watch Chris McCarthy perform from home during this time of social distancing!

HCS has commissioned this series enabling us to support artists. In addition, donations will be split between the artist and Passim to offset lost income due to the corona virus.

Chris McCarthy has established himself as “one of the most impressive and original pianists on the New York jazz scene” (Hot House Jazz Magazine) after only three years in the city. With Still Time To Quit, his Ropeadope debut, McCarthy steps into the foreground as a singular composer and band leader after years as an in demand sideman. Still Time To Quit draws from every corner of his musical universe, from funk jams (“Valedictorian Driver”), to contemporary classical (“The Nightmares”). Four of New York’s finest improvisers, Takuya Kuroda, Michael Blake, Sam Minaie and JK Kim bring McCarthy’s compositions to life in this innovative and inspired album.

Previously, McCarthy can be heard backing up renowned trumpeter Jason Palmer on At Wally’s Vol. 1, as well as Ropeadope’s The New York Sessions (Jared Sims) and Cousoumeh (Akinola Sennon). He also held the piano chair in Jerry Bergonzi’s quintet in Boston for two years. These days, he can be heard on vibraphonist Sasha Berliner’s acclaimed new album Azalea, a new duo with renonwed vocalist Clotilde Rullaud, and playing around NYC with luminaries like Jeff Williams, Ben Allison, and Dan Blake, as well as fast rising peers such as Tony Glausi and Vanisha Gould.

To bring Still Time To Quit to life, McCarthy drew on the skills of musicians equally at home in deep funk pockets and wild improvisation. The album’s horn front line is one of the most stacked on a jazz record in recent memory. Takuya Kuroda has made a name for himself as one of the fastest rising trumpet players on the scene today through two critically acclaimed albums, Rising Son and Zigzagger. Michael Blake has been an enduring presence on the NY scene for 30 years, playing with everyone from Charlie Hunter to Oliver Lake. As a front line, they bring an enormous amount of character to every solo, and they interact with each other at an almost telepathic level.

Bassist Sam Minaie and drummer JK Kim round out the quintet. Sam can be heard around the world with everyone from Tigran Hamasyan to Melody Gardot. He also mixed and mastered all of Still Time To Quit. JK has quickly made a name for himself as one of New York’s most in demand drummers. Together, they are a uniquely groovy yet open ended rhythm section, always bringing the funk in tandem with a sense of adventure.

Still Time To Quit does not conform to any of the stereotypes or that often befall contemporary jazz. This is a carefully curated band of the McCarthy’s favorite musicians making each other sound their best, with the natural chemistry in the band being apparent to the listener from the first track. It is abduntantly clear that Chris McCarthy is a force to be reckoned with as one of New York’s finest young pianists. With his unique compositional approach and diverse array of collaborations, his stature in the global jazz scene will only continue to grow. Look for a second release from this quintet in 2021.