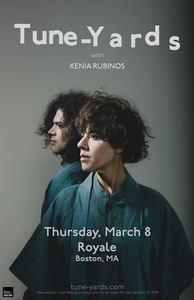 Tune-Yards was formed by Merrill Garbus in 2006, and that band name has ever since been synonymous with forward movement—whether because of the group's explosive performance style, the always-surprising way in which their songs unfold, or the lines Merrill draws between music and social activism. First gaining notice with the debut BiRd-BrAiNs, which The New York Times called “a confident do-it-yourselfer's opening salvo: a staticky, low-fi, abrasive attention-getter,” Garbus forged a reputation as a formidable live presence through relentless touring.

Garbus became a producer in her own right working with bassist Nate Brenner and engineer Eli Crews on 2011's w h o k i l l, a startling and sonically adventurous statement that led to a whirlwind period where the band accrued accolades from critics (including the #1 spot on the Village Voice's 2011 Pazz and Jop poll.) In 2014, Tune-Yards released Nikki Nack, and through touring and licensing music from that album, they raised money to begin The Water Fountain, a fund for water-related causes which has donated over $75,000 to various nonprofits since its inception.

Tune-Yards has collaborated with Yoko Ono, Laurie Anderson, David Byrne, Mavis Staples, and others. They are currently working on their fourth album, for release in 2018.