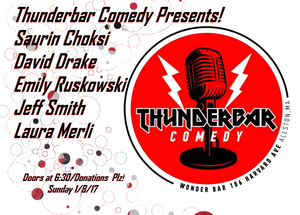 Show is free, but boy howdy we'd appreciate a donation.

Saurin Choksi is the winner of the Boston Comedy Festival and has performed at top comedy venues across the country, including Carolines in New York, The Laugh Factory in Los Angeles and The Comedy Attic in Bloomington, IN. His stand up has been featured on various outlets, including Fox TV and Sirius/XM Radio. Choksi is a proud alumni of the nation's longest running independent comedy showcase, Chicago's The Lincoln Lodge.

David Drake has been invited to perform in over two-dozen national festivals, been featured in Comcast's televised stand up specials 'Who's Laughing Now?' and 'Trial by Laughter', and will appear on this season of Laughs on Fox. In 2014, he was named one of Complex Magazine's ‘Comics to Watch Under 30’ and the Chicago Tribune called him an ‘Affable new face we wont soon forget.’ He is a producer of Comedians You Should Know NYC, cast member at ComedySportz Chicago, and his first album ‘Dave’ debuted in the Top 5 of the iTunes comedy charts.