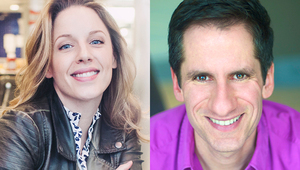 Jessie Mueller returns to Boston, having most notably delighted Boston audiences in her acclaimed run in Waitress. Mueller won Tony, Drama Desk and GRAMMY Awards for her starring role as Carole King in Beautiful – The Carole King Musical. She was also nominated for a Tony for her performances in On a Clear Day You Can See Forever, the Broadway run of Waitress and Carousel.
Through stories from Mueller’s unique career, as well as musical performances through the songs for which she’s most known, the evening promises to bring audiences a new perspective on the songs they know and love.
Produced by Emerson Colonial Theatre and Mark Cortale, The Seth Rudetsky Series brings hilarious and insightful conversation between Seth and each of the artists, anchored in each star’s own brand of blinding talent. Other dates in the series: Cheyenne Jackson on October 4 and Kelli O’Hara on January 9.