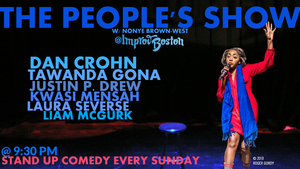 
Every Sunday at 9:30 at ImprovBoston, The People's Show brings you the best in Boston standup comedy. From producer David Thomas and a rotating series of brilliant monthly hosts, each People's Show Sunday brings an all-new lineup of hilarious comics you need to see. The world-famous People's Show: the funniest way to end your weekend.