The Market Will Save Us 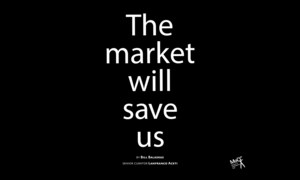 The Director of the Arts Administration program at Boston University, Lanfranco Aceti is proud to announce a new curated project, The Market Will Save Us, a banner installation and performance by international artist Bill Balaskas.
The artwork, premiered for the first time in the US in Boston, will be paraded around the Boston Common, accompanied by a marching band during Art Week Boston.

The banner was presented for the first time in 2013, on the façade of the Royal College of Art in London – one of the most important art schools in the world. The banner’s aim was not simply to disrupt the façade of a prominent public building by covering part of it. Rather, it aimed at disrupting the very idea of what it means to be an artist working under the current socioeconomic conditions of austerity and insecurity.

By alluding to the contradictions through which the art world operates today, the work highlights the catastrophic economic determinism that dominated preceding the global financial crisis of 2008. Following this turbulent period, as art education increasingly becomes a privilege, the role of the art market has grown more and more influential. And the question is: who is going to benefit from this new relationship – the arts, the market, or perhaps neither, in the long-term? The continued development of the proposed query allows Balaskas’ piece, The Market Will Save Us, to be as relevant today as it was upon its premier three years ago.

This performance is part of THE SOCIAL, the International Biennial Conference of Visual Culture. This event is sponsored by the Museum of Contemporary Cuts and the BU Arts Initiative with the support of Art Week Boston. If you wish to support the Museum of Contemporary Cuts and its art programs we have a Kickstarter for the artworks at this link: https://www.kickstarter.com/projects/mocc/the-body-of-the-people?ref=user_menu