THE MAN WHO WANTED TO CHANGE THE WORLD 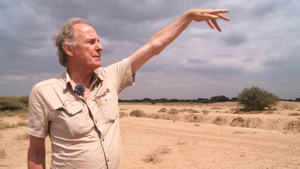 Peter Westerveld was the inventor of large-scale contour-trenching (digging ditches on contour) in hydrologic corridors. A strategy designed to address the desertification of the planet. First and foremost, however, he was an artist. He thought like an artist and he worked as an artist. His art is imbued with his view on the relationship between man and his environment, in particular between the Western man and the African continent. Sprouting from his lifelong fascination for water, Peter applied himself to creating solutions for the ongoing erosion and desertification he personally witnessed. With over 15 years of experience in soil experimentation in Mali, Tanzania, and Kenya, Peter began working on his opus magnum, the 'Hydrologic Corridor', in 2008. His drawings and calculations of interventions in the landscape are all part of his 'artwork for the world'. Peter was completely dedicated to his life in the field and his mission to restore ecosystems and reverse climate change. Although his heart belonged to Africa, he worked on plans for Australia, the Arab world, and the Americas. He was not just talking about the problem of climate change, he wanted to try to do something about it.

On 30 August 2014, Peter Westerveld unexpectedly passed away, but his energy and mission live on in the many people he continues to inspire to take action.