The Indo Dresses Up as “‘90s Teen” for Halloween Weekend 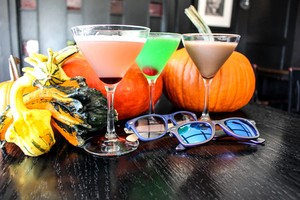 This Halloween long weekend, The Independent in Somerville’s Union Square will take it back to a time just before its 2001 birth: the 1990s. For four straight nights, The Indo will channel its inner ‘90s teen by screening cult classic flicks with captions while the bar shakes up the ubiquitous cocktails made famous in the decade. On loop will be movies such as The Craft (because “We are the weirdos, mister,”) Clueless (“As if!” that wouldn’t make the cut), Heathers (because, you know, “Chaos is what killed the dinosaurs, darling”), and more. From the bar comes twists on happily forgotten “classics” ($10 each) like the French Martini with vodka, pineapple, raspberry and vanilla, the Apple-tini with rum, apple, ginger, citrus and bubbles and the Choco-tini with bourbon, chocolate and chipotle.

Additionally, on Saturday night The Indo will host a costume contest with prizes in two categories: best ‘90s-themed costume, and best general costume. To the victors go a $40 gift card to The Independent or its sister restaurant, Brass Union.