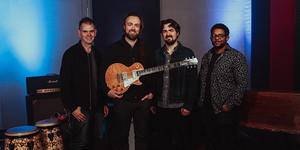 Described by The Boston Globe as "a night of rocking blues and funk jams," The Gravel Project is the creation of guitarist, singer, and composer, Andrew Gravel and brother, Hammond B3 organist and composer, Jordan Gravel. With a blues rock sound fused with a funk edge, the band has been creating a buzz with their eclectic style and gaining momentum in Boston, New Hampshire, and all over the East Coast. The Gravel Project electrifies crowds with inventive original songs, creative interpretations of well known classics, and high energy group improvisation. The band released their second full length album, Wishful Thinking in 2017 and live album, Live at Village Fest in 2018, and is planning to release their next album later in 2021.