The Gallows Hill Project: Locating the Site Where the Salem "Witches" were Hanged 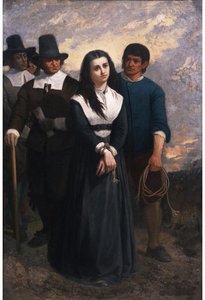 After centuries of conflicting beliefs and more recent Internet speculation, a team of scholars has verified the spot where nineteen innocent people were hanged during the 1692 Salem witch trials. The site is Proctor’s Ledge—an area bounded by Proctor and Pope Streets in Salem. Witch trial experts and Gallows Hill Project team members, Marilynne Roach and Emerson Baker, will explain how they used trial papers, eyewitness accounts, maps from different time periods, oral tradition, and new technologies to confirm the site. They will also discuss the long history of efforts to locate and memorialize the site, as well as the current work by the City of Salem to properly maintain and mark Proctor’s Ledge.

Marilynne K. Roach is the president of the Historical Society of Watertown and author of several books on Salem and the witch trials, most recently, Six Women of Salem: the Untold Story of the Accused and Their Accusers in the Salem Witch Trials.

Emerson "Tad" Baker is a professor of history at Salem State University. He teaches courses on material culture, archaeology, museums, and architectural history. His principal area of interest is seventeenth-century New England. He is the author of A Storm of Witchcraft: The Salem Trials and the American Experience, The Devil of Great Island: Witchcraft and Conflict in Early New England, and co-author of an award-winning biography of Sir William Phips.