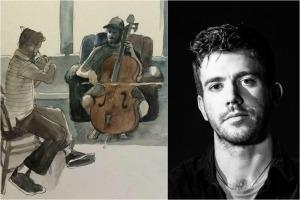 Rich harmonies and thoughtful songs accompanied by guitar, cello, violin and banjo as only a group like the Brother Brothers can offer. Already established players and composers in a wide spectrum of genres throughout the NY musical circuit, they are finally teaming up to bring their individual experiences together.

Adam Moss
Brooklyn based fiddler and songster Adam Moss’ musical career can most easily be characterized by the variance of his influence. Adam loves and plays in the Klezmer, Bluegrass, Old-time and swing traditions which lends itself to a very unique and innovative style in performance setting. He is actively touring with Boston’s Session Americana, Brooklyns The Defibulators, Ana Egge, and has formerly toured with Anais Mitchell’s “Hadestown,” and Texas’ 3 Redneck Tenors.

David Moss
Originally from Peoria, IL, David Moss began his musical journey playing cello and singing in various formats from a very young age. After receiving a degree in cello performance from the University of Illinois (Urbana-Champaign), he moved to Austin, TX in 2007 where he immediately formed with the trio The Blue Hit. There, David attended the Kerrville Folk Festival, and before long was playing guitar and writing songs. By the summer 2011 he was a finalist in the prestigious New Folk competition and went on to become a winner.

On his album "Bag of Bones" which was released in 2010, David has a gruff voice as a result of a Granuloma on his vocal chords. In November 2012, however he underwent surgery and has rejoined with his old and original vocal timbre. He is currently living in Brooklyn, NY and performing his songs in various formats with his twin brother Adam Moss and continuing his cello career playing and composing with The Blue Hit as well as groups such as the Satellite Ballet, Moishe Circus, The Broken Stares, Ana Egge, Roy Williams and The Human Hands and many others.

David released his album "Songs for Willoughby" in March 2014, and his breakout hit "Jerusalem" was featured on Democracy Now! in July 2014.

Lyle Brewer’s new solo guitar album “Juno” is the result of two things: the snowstorms that consumed Boston in the early months of 2015 and the sobriety that saved his life. “Juno” was released on the one-year anniversary of Brewer’s decision to get sober, and its stripped-down, acoustic instrumental songs reveal a newfound sense of clarity and renewal. “Juno,” whichmade the Boston Globe’s list of Best Local Albums of 2015, “showcases the cool sophistication of his guitar playing, not to mention his evolution as a songwriter” (Boston Globe). The first blizzard of the season hit Boston on January 27, 2015 andshut down the city for three days. That blizzard, “Juno,” lent its name to the title track. Every storm that winter, Brewer wrote a song. He wrote more over the summer, even as he was finishing up work on his self-titled record (released June 4, 2015).Without hangovers, he wrote in the morning, and without late nights at the bar, he wrote at night. He wrote a piece inspired by Bach, and another inspired by Brazilian composer Luiz Bonfa. “The only reason I was able to do this is because I got sober,” he says. “Period. Sobriety saved my ass big time. I am extremely proud of this album. I am extremely lucky to have supportive people in my life. I am grateful to be alive, to be sober, to be able to make music for a living."

Brewer’s self-titled album, his fourth, was released in the same year. It is a full-length album of original material that weaveseffortlessly throughout a variety of musical styles. The songs “are not about flashy technique or mind-numbing solos. They’re thoughtful, artfully composed instrumentals,” says the Boston Globe. Vintage Guitar Magazine writes, “There’s not a bad cut here, including several short interludes that are guitar heaven. Brewer’s streak of winners continues.”

Brewer has been a staple of the Boston music scene for the last ten years. Ask any musician who has worked with him and they will laud his mastery of almost any style of music, with a maturity that belies his age. “Brewer’s dexterity is often jaw-dropping. Not every guitarist can swerve from the swampy stomp of “Green Onions” into the moonglow of “Mr. Sandman” …always with the same sophistication and feeling” (Boston Globe).

Originally from Andover, Massachusetts, Brewer picked up the guitar at the age of 12. He was a guest on Prairie Home Companion when he was 21, and attended the New England Conservatory of Music for 3 ½ years before dropping out to play a gig that conflicted with a “Career Skills” class. He’s had a stutter all his life, which may be related to his fluid expressiveness on the guitar, the instrument that allows him to speak. Brewer also teaches guitar at the Berklee College of Music, and is currently learning Bach’s Lute Suites by ear.