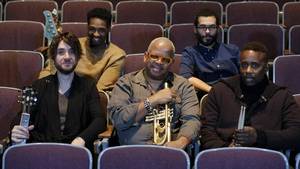 “Music and art have the power to change hearts and souls,” believes composer and trumpeter Terence Blanchard — a belief brought to life through the music of Blanchard and his E-Collective. This revolutionary ensemble thrives off the perfect mixture of Blanchard’s genius and the innovations of four young musical pioneers: guitarist Charles Altura, pianist Fabian Almazan, bassist David ‘DJ’ Ginyard Jr., and drummer Oscar Seaton. It was while recording the scores for Spike Lee’s Inside Man and Kasi Lemmons’ Talk to Me that Blanchard and Seaton first dreamt of a band that layered grooves teeming with funk, R&B, and blues colors. Years later, that dream came to fruition and formed the foundation for the E-Collective’s signature sound. A Grammy Award winner and Oscar nominee for BlacKkKlansman, Blanchard is also the first black composer to have his work staged by the Metropolitan Opera.