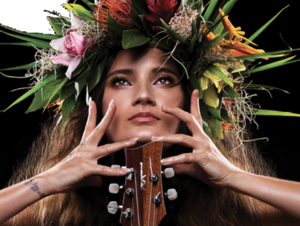 Now is your chance to catch ukulele virtuoso and one of the hottest rising stars in world music, Taimane, in fresh and full blossom as she continues her first East Coast tour at City Winery on January 15. Born and raised in Hawaii of hapa Samoan descent, Taimane is renowned for her fierce and inventive style of playing the four-string island staple using both music and movement to paint vibrant images. From Bach to rock, flamenco infernos to tribal hymns, Taimane lights up the stage like no other.

Since setting her sights beyond the Hawaii horizon in 2017, Taimane has wowed ever larger audiences including performances alongside Michael Franti to over 10,000 people at both Red Rocks and The Gorge Amphitheatres and her own show in front of 20,000 at the Staples Center in Los Angeles. At SXSW 2019 in Austin, TX, Taimane’s rise hit high speed with NPR and other media hailing her as one of the standout artists of the mega festival. She continued to soar thereafter garnering the spotlight from Reuters News Agency, experiencing an explosion of new fans around the globe (over 250,000 online followers and counting), packing venues across Europe and selling out all five of her summer concerts in North America.

2020 looks on-track to further propel Taimane as she kicks off the year performing at one of the most acclaimed venues in Germany, the 4,000-seat “Elbphilharmonie,” records an episode of NPR’s Tiny Desk series, returns to SXSW and sees a taping of her sold out 2019 Berkeley concert broadcast on select PBS television stations nationwide.

Come experience Taimane’s beauty, grace and fire and see why she is quickly becoming a global cultural beacon.