Summer Concerts in the Greenhouse Garden 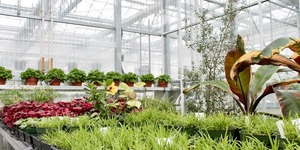 Enjoy the summer beauty of the flower gardens outside the Mount Auburn Greenhouses while listening to folk and bluegrass performances by local artists. Limited seating available, please bring your own blanket or chair. Rain or Shine. In case of rain we will move inside the greenhouse.

Thom Sayers went to college at UConn in Storrs, CT with a Harmony guitar in hand, vowing that he would learn to play it while simultaneously getting a degree. Whether the playing enhanced or detracted from his studies is still under review. But in the end he lived up to both of those goals. He was pulled strongly in the direction of bluegrass initially and eventually joined his first band The Colt House Boys. Over the years, Thom has pursued bluegrass flatpicking, jazz, other roots music styles and of course Old-Time music. Thom’s philosophy is that an acoustic guitar is first and foremost a rhythm instrument. Melody’s the master and rhythm’s the king. Thom has played in many bluegrass and jazz combos over the years but his favorite thing is getting together with folks on an impromptu basis to just play music. Playing rhythm guitar for an Old-Time session is a zen-like experience. If you’re doing it right, you can feel and hear the fiddles stand up dance over the rhythm. Old-Time music has an incredibly rich history and a bibliographic body of music to explore. Tim Rowell and Thom have gotten together, first at OT music festivals, to explore the possibilities of playing this music on banjo and guitar with both instruments playing rhythmic and melodic roles. The two have developed a musical camaraderie and enjoy bringing other elements into the tunes they play while paying homage to the musical tradition. Thom hails from Connecticut and sometimes makes his home in North Carolina.

Tim Rowell is an avid clawhammer banjoist, tune collector and educator. He was heavily influenced as a kid by Pete Seeger and a whole bunch of wonderful musicians from the Hudson River Valley. An award winning player and teacher, Tim has taught and performed at regional schools, stages and music camps from Los Angeles to Boston. Author of several books of clawhammer tablature and producer of Old-Time music CD’s, Tim has a deep interest and affection for Southern Appalachian music and culture.

On a warm summer morning, it is a delightful if surprising sound that sometimes fills the air around Brattle Square, the sound of old-time fiddle and banjo weaving together seamlessly. This year will be the fourth year of their musical partnership, John Maguire on the fiddle, and Don Borchelt on the five string banjo, playing old time Appalachian tunes, with some country blues and mountain ballads thrown in when the spirit moves them. John is an old rock and roll professional who migrated to old time fiddle about a decade ago. Don has been playing the banjo for over fifty years, and is a leading proponent of the old-time three-finger style of picking. Together they prove that there is nothing as sweet as the blend of fiddle and banjo on a summer evening.

A young upcoming band playing old-time, bluegrass music. Multitalented sisters, Audrey and Megan Mendenhall play: banjo, mandolin, fiddle, guitar, and dobro, with Jack Bram on guitar and bass. Winners at the Lowell Banjo and Fiddle Festival for the past two years, Audrey and Megan have been plucking the strings since they were 7 & 9 years old. Jack Bram is a musical virtuoso who plays multiple stringed instruments such as saz and lap steel. They have been playing together since 2015 and have performed at the Burren in Somerville, Club Passim, and Me and Thee Coffee House in Marblehead.

See all other #freeconcerts this summer on one map