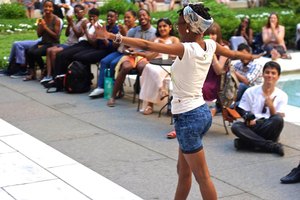 Catch Berklee performers beside Macy's in downtown Boston on Summer Street on Thursdays and Fridays from May through October. Located in the heart of Boston’s Financial District and within walking distance from an array of restaurants, South Station, and the waterfront, Summer Street is the perfect downtown lunchtime and dinnertime location. The Downtown Boston Business Improvement District (BID) is a private, nonprofit corporation created and maintained by property owners to serve the entire downtown community.