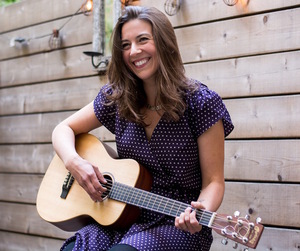 After a break of about a decade away from music, a career change and two children, Lisa Bastoni has released The Wishing Hour (2017), produced by Grammy-nominated songwriter and producer Felix McTeigue (Lori McKenna/Anais Mitchell). Lisa’s visceral and personal songs have recently earned a number of awards – in the past year, she has been selected to showcase at both the Falcon Ridge Folk and NewSong Music/LEAF Festivals, and her song “Rabbit Hole” was grand prize winner of the Great American Song Contest. The Wishing Hour debuted as #1 most played album on Boston’s WUMB.
During her break from music Bastoni had a “job in a cubicle,” went to graduate school, became an art teacher and for the past few years has been raising two young children. While she was on a hiatus from music, Bastoni said she found inspiration. “I played just a handful of concerts in all that time, and thought I was done with music for good,” Bastoni said. “But one afternoon, while out for a walk around the neighborhood with the kids, I started to get ideas for song lyrics. And soon it was like a flood of song ideas – and as the songs started to come back, so did the desire to perform and record them.”
While some of the album was recorded in studios in Nashville and New York, large portions were performed right in Bastoni’s Watertown home. “I had a 6 year old laptop set up in the kids’ playroom, and I’d just go in there after their bedtime and get to work, writing and recording song demos, often pretty late into the night,” Bastoni said.
For the album, Bastoni brought in her old friend Josh Kantor, who she first met in the early 2000s when she was busking in Harvard Square and on Red Line platforms. The two played together in those days, with Kantor playing upright bass. Since that time, Kantor has become the Fenway Park organist and a well known side player and session musician.
She also reached out to Felix McTeigue, a producer and songwriter from Nashville. He had contacted Bastoni several years ago about working together. “To my surprise, he remembered me and the process was off and running pretty quickly,” Bastoni said. “There was a period of just generating ideas and material, and selecting a few songs to start working on.”
Before she could start recording, Bastoni needed to find the funds to create the album. She put together a crowdfunding campaign, and “some very generous fans from my early days performing” helped meet the goal within hours.
Other musicians who played on The Wishing Hour include Chris and Eleanor Masterson of The Mastersons – Steve Earle’s backing band — as well as Kelly Hogan (Neko Case/The Decemberists), John J. O’Reilly, Jr. (Rachael Yamagata/Fun), Lula Wiles’ Ellie Buckland, and Bastoni’s friend and frequent singing partner Naomi Sommers.
Lisa Bastoni currently maintains an active performance schedule. She has shared the stage with artists such as Lori McKenna, Regina Spektor, Little Big Town, The Low Anthem, Kim Richey, Ellis Paul and Arlo Guthrie.
—by Charlie Breitrose, excerpted from Watertown News (MA), January 2017