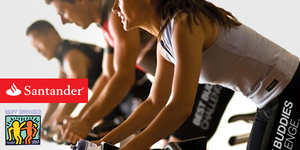 What:
Santander Bank’s “In It to Spin It” Cycling Challenge, a head-to-head outdoor cycling competition in celebration of the Bank’s sponsorship of the upcoming 17th Annual Best Buddies Challenge: Hyannis Port presented by Pepsi-Cola and Santander Bank. Taking place during National Bike Week, the event supports Best Buddies International, a groundbreaking nonprofit dedicated to establishing a global volunteer movement that creates opportunities for one-to-one friendships, integrated employment, and leadership development for people with intellectual and developmental disabilities.
New England celebrities will captain four teams of eight riders facing off in two 10k heats on state-of-the-art Cannondale bikes mounted to stationary CompuTrainers. Best Buddies Ambassadors will also participate on each team as honorary co-captains.

In addition to the opportunity to cheer on the riders, the outdoor competition will celebrate National Bike Week and feature a host of spectator activities, including health and wellness tips, treats from local food trucks, giveaways and a raffle for prizes including the chance to win the opportunity to play football with Tom Brady at the Best Buddies Tom Brady Football Challenge and the Guy Cooking With Best Buddies Celebrity Chef Food & Wine Festival presented by Pepsi-Cola at Harvard Stadium on June 3rd. Spectators will also have the opportunity to learn more about Best Buddies and contribute to the cause.

How:
*Spectator viewing and health and wellness activities are free and open to the public*
Access to participate is limited; to enter to win a chance to compete, visit http://1033ampradio.cbslocal.com/in-it-to-spin-it now through Thursday, May 12.

Santander Bank, N.A. is one of the country’s top retail and commercial banks by deposits and a wholly owned subsidiary of Banco Santander, S.A. - one of the most respected banking groups in the world. With its corporate offices in Boston, Santander Bank’s more than 670 branches and nearly 2,100 ATMs are principally located in Massachusetts, New Hampshire, Connecticut, Rhode Island, New York, New Jersey, Pennsylvania and Delaware. The Bank’s 9,400 employees are committed to helping our more than 2.1 million customers make progress toward their financial goals with the support of our call centers, interactive online banking platform and easy-to-use mobile app. Madrid-based Banco Santander (NYSE: SAN), serves more than 117 million customers in the U.K., Europe, Latin America and the U.S. Through its local affiliates, including Santander Bank, Banco Santander is the largest corporate contributor to higher education in the world, investing over $165 million annually in colleges and universities across more than 20 countries, including the U.S. For more information on Santander Bank, please visit www.santanderbank.com.