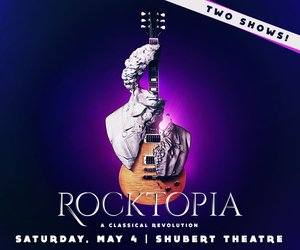 Direct from its smash-hit run on Broadway, the international music sensation ROCKTOPIA comes to the Boch Center Shubert Theatre for two performances only on Saturday, May 4!

An explosive musical concert event that fuses the most iconic 20th-century rock with world-renowned classical masterpieces, ROCKTOPIA features the works of musical innovators across centuries—including Journey, Mozart, Queen, Beethoven, Aerosmith, Handel, Led Zeppelin, Tchaikovsky, U2, Heart, Puccini, The Who and more—performed by an elite lineup of vocalists, a five-piece rock band, a thirty-person choir, and a twenty-piece orchestra.

An inaugural performance of the show, “Rocktopia: Live from Budapest” produced by Two Hands Entertainment/Jeff Rowland, was recorded in front of a live audience in June 2016 at the 19th century Hungarian State Opera House for PBS. It was performed with the Budapest Philharmonic Orchestra with six vocalists, a five-piece rock band, the Hungarian State Opera Chorus, and the Jazz and More Choir. ROCKTOPIA toured over twenty cities in the United States in 2016, featuring local symphonies and choirs across the country, and rocked Broadway during its spring 2018 limited engagement.

Adored by audiences and critics alike, Howard Stern praised the show saying, "it’s very cool…really a lot of fun.” “Rocktopia blends classical music with classic rock, a big live orchestra, and an even bigger choir to create an evening that has even the most jaded New Yorkers dancing in their seats,” exclaimed Broadway Box. DC Metro Arts adds, “with rousing peaks and powerful performances, you’ll be rocking and cheering! All of the musicians are impressive - with Tony Bruno’s guitar solos being especially electrifying and Máiréad Nesbitt’s performances a thrilling highlight.”