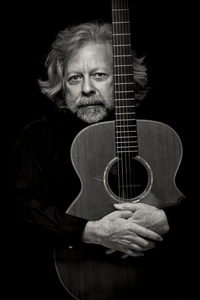 Rob Siegel is well known in Boston folk music circles as an innovative songwriter who draws from his idyllic yet stressed-out middle-class suburban existence and produces memorable, intelligent, well-crafted songs. Rob has opened for Bill Staines, Vance Gilbert, Jack Hardy, Geoff Muldaur, and others. His 2000 debut CD “Shaker Chair” received airplay on the WUMB radio network, and his 2004 CD “Voices from the Right Brain: Rob Siegel Live at Club Passim” reached #52 on the FolkDJ ranking, which ain’t bad for a guy who almost never traveled outside of Rt 495 for a gig.

Rob took his foot off the gigging pedal in the mid-2000s when he projected the college bills for his three kids, but now that they’re grown, he’s back. His first new CD in 14 years, “A Landscape of Ghosts,” will be out in April.

Rob says “Some folks who live and breathe traditional folk music think I’m too wordy and too metaphor- and reference-heavy. What I try to be is challenging – somewhere between William Faulkner and Robin Williams. I don’t like songs that aren’t memorable, and I try not to write them myself.”

2014 Falcon Ridge Folk Festival Emerging Artist – Chris LaVancher’s performance evokes a mini-movie festival in your head, complete with a full soundtrack. He writes cinematic, character-driven songs – from a farm girl’s beauty-queen-moment in the 4th of July parade, to the wild cast of characters in a run-down traveling circus, to the gun-toting rube who falls victim to a young con-girl and her boyfriend Elvis.